Looking at the core paintings there is no immediate insight into the multi-layered nature of the art work. Each viewer might comprehend and interpret the depiction’s different levels individually and access the creation personally.

The beholder has to access the core created by the artist, towards the interior as well as the exterior, towards top and bottom and beyond the horizon.
The core is the expression of a transitory state, slumbering, relaxing, constricted, frozen, breathing, pulsating and breaking open. The core is waiting for the perfect moment to unfold and to break through into a new space.
​
Shape and colour reflect the artist’s envisaged affectivity - an emotional snapshot, a moment that shows the core - or the self - in its colour spectrum. The artist is inspired by music that evokes memories of past live stages. There is no pre-determined colouring process, but the decision of the present moment to mix a particular colour and to harmonize it with the already existing coats of paint.

The circle is the oldest symbol in the world and a shape accessible for all cultures, thus, the core is a universal emblem.

It can stand for a basic nourishment, like a grain of rice, a grain of wheat, an egg, a corn grain, a bean or a potato. It can also be a cell, the beginning of all life, the world and the universe, it can stand for a halo we know from representations of saints.

All the paintings are titled “Kern” (Core).​
The works are inspired by years of engaging in medieval manuscripts. Quite often the colour schemes of 10th century Ottonian book illustrations can be found in the depictions whose shapes and colours the artist abstracts. Moreover she transforms spiritual representation into a secular picture. 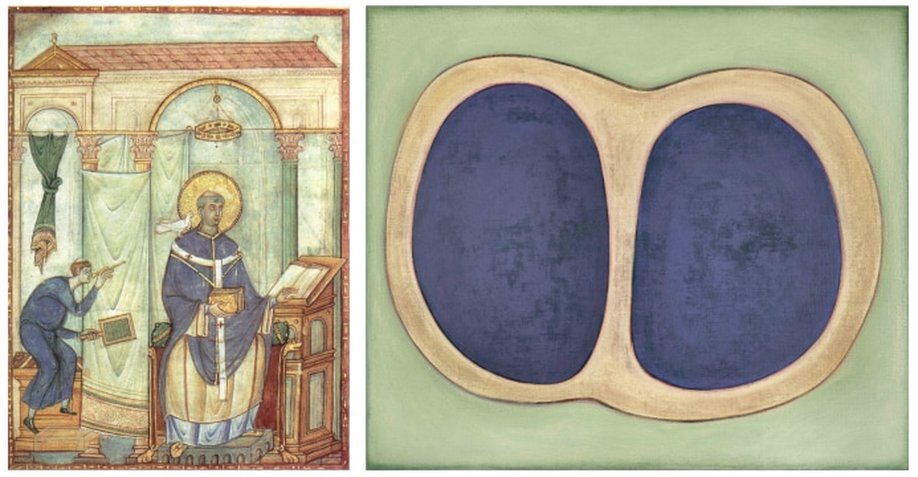 Ottonisch, Gregormeister, ca. 985, Trier ------------------> Heikedine Günther, Kern No. 283, 2017, 120x140cm, Oil on Canvas
Technique: the core depictions are painted on canvas or jute. All paintings have a gold base that serves as reflection surface. The “matured” core is drawn on to this surface. Heikedine Günther works with wide paintbrushes, precise and sweeping. She does not just use her hands to paint, but employs a dynamic swinging motion from her hips and shoulders.
​
Each painting bears on its reverse side a specific documentation of the various individual layers and information on the work (name, title, date, size, signature).

Other projects are planned:
​

1991, directly after the “turnaround”, the artist moved to Berlin. During her time there she worked in various creative areas and painted guratively. In 2004 she produced her first core painting. Until this day Heikedine Günther is dedicated to the topic core (self). In 2009 the artist moved to Switzerland, where she lives and works both in Basel and near Lucerne.

​In 2014 the artist decided to devote her live exclusively to art again. ​